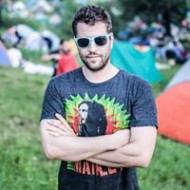 Born in Szczecin on July 3rd, 1983. On a quest for own his own sound since he was 8., searching for it among guitars, keyboards and saxophone. He had a 10 years break in playing and making music which he devoted to his career and creating the StageBoosters. During this break he made a guest appearances with – among others – the Bad Staff on the main stage of Woodstock Festival Poland. In his thirties he returned to playing music and entered a stage as a session guitarist for "Kieru" – their first joint concert was on July 10th, 2014 on the main scene of Woodstock Festival Ukraine. www.facebook.com/MMikeofficial www.facebook.com/Stageboosters